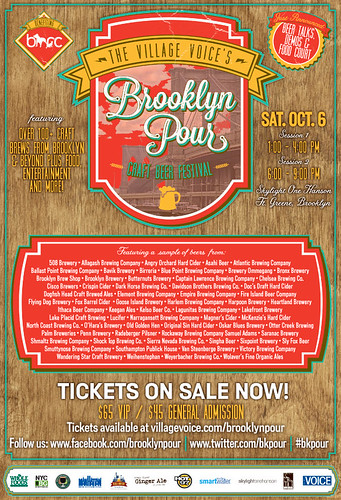 This Saturday, October 6th, marks the second annual Brooklyn Pour hosted by The Village Voice; the event will be held at the beautiful, landmarked One Hanson Place, aka the old Williamsburg Savings Bank aka “The Clocktower” to Brooklynites.

Over 100+ craft brews will be served, a number of them coming from the fine state of New York, such as Ommegang, Bronx Brewery, Captain Lawrence, Empire Brewing, and Kelso Beer Company.  The breweries will be serving some of their finest offerings, so expect to taste seasonal and reserve brews.

While sipping on some of the samples, make sure to stop by the beer talks and demos with Jimmy Carbone from Jimmy’s No. 43, Brewed Awakening author Joshua M. Bernstein, and Brooklyn Brine’s Shamus Jones with Dogfish Head Brewery.

Looking for some food to go with all that beer?  Stop by the food court to pick up offerings from Lucky 777 Chili, Der Schwarze Kolner, Lola Bistro Chez Oskar, and  Stable House Bar and Cafe.

Proceeds from the event are going to Brooklyn Animal Resource Coalition (BARC), so remember you’ll be supporting a pooch while you enjoy your brew!

Finally, see you on Saturday!