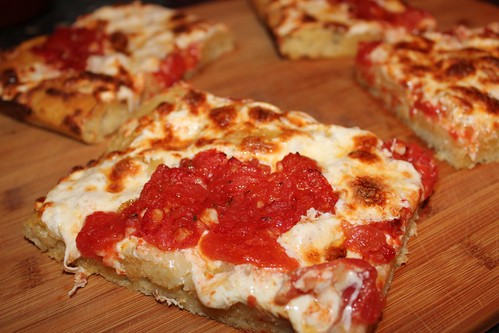 Do you ever set out to make one thing and it end up being something completely differently, albeit delicious in the end?

That’s what happened with this pizza.

See my actual goal with this recipe was to make a grandma pie, but too much water and oil accidentally turned my dough into focaccia. Oops.

Before I continue, let me explain what a grandma pizza is, because it is a specialty pie that can really only be found on Long Island, in NYC and Northern NJ. Grandma pie is a square pie, but a much thinner crust than Sicilian, topped with shredded mozzarella and with a sauce of uncooked – to barely cooked chopped tomatoes, garlic and olive oil.

What spurred my desire to make my own version of grandma was a pizza crawl that I participated in a few weekends ago.

Yes, a pizza crawl. You do those sort of things when you have so many amazing pizzeria’s in your vicinity.

This crawl happened to be taking place in my own neighborhood of Brooklyn, so I was definitely in.

Our first stop was at a little place called Lo Duca. On the outside Lo Duca looks like your typical slice joint, but it is family run and their ingredients are imported from Italy. While they do most of their business from commuters and locals (they are stationed right next to a subway stop) if you ask they will cook up two excellent pies for you. The first being their grandma and the second a pizza called sfincione.

Let’s start with the grandma, having arrived late to the crawl (I previously had a Zumba session with a friend scheduled – hey you gotta work out to keep all this pizza eating off!) I sampled my pizzas cold and they were good.  I could have my slices reheated but 1) I was starving and 2)they looked to good to wait to be reheated and I wanted it in.my.belly.now.

I don’t like cold pizza, ask my  husband – even when we get delivery, half the time I want to heat it up even more.  But this – this was good even cold, I like my pizza to have a good hit of garlic and you get it on the first bite.  Lo Duca doesn’t deliver, but I’ll be going back and carrying a hot pie home for dinner some time. 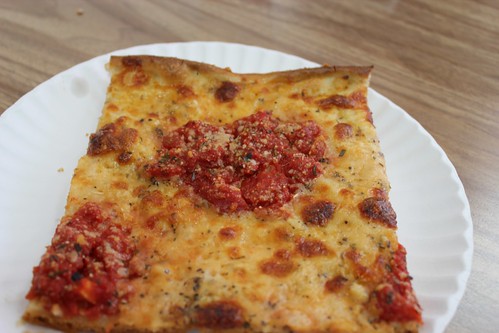 The second pie sfincione, I had never had nor heard of before.  It is mostly a cheese-less pie, except for little squares of salty caciocavallo cheese.  There is a nice thick tomato sauce and a pungent bite of anchovies.  I’m not an anchovy on my pizza person, but these are melted into the sauce and give a salty kick that I really enjoyed, but also means one slice is enough unless you want to chug water for the rest of the night. 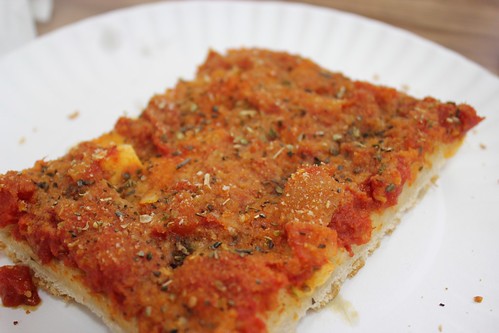 After Lo Duca we moved on to San Remo Pizzeria.  San Remo was for a while our go to pizzeria, but we made the big mistake of ordering whole wheat pie from them one night, was seriously disappointed and stopped ordering in from then since.  Now, I don’t know if they thought they were being reviewed when they saw or group or if their grandma is actually that good but San Remo stepped up their game and delivered a truly delicious pie.  I preferred Lo Duca’s sauce, but I liked the addition of more than one type of cheese. San Remo has restored my faith in them, so but only time will tell if this was a fluke or their grandma really is that good. 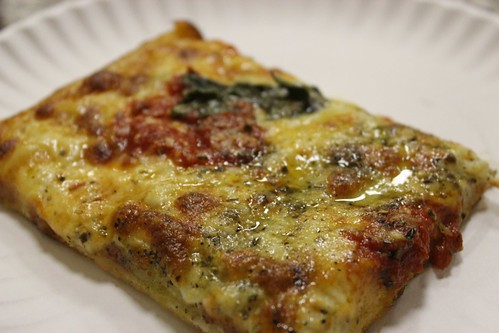 Now that my pizza tale has ended, let’s get back to business.

Since most of the pizzas that I make at home are neopolitan style, I searched around online for a dough recipe that I thought would work.  I eventually decided a recipe from Peter Reinhart’s American Pie book.  His recipe originally called for bread flour, but I switched it out for half semolina and half all-purpose.  I believe there was my mistake,  I don’t make bread often, so when it comes to substitutions it is a guessing game.  Cooking substitutions or even baking I pretty much know what I’m doing at this point.  Bread or pizza dough, I’m still a novice.

For the dough: In a large bowl, or the bowl of your stand mixer, fitted with the dough hook, combine the flours, salt, yeast and water.   Mix until the ingredients come together, about 3-4 minutes, if you find the dough is not coming together – as mine did not – add a few more tablespoons of the all-purpose flour with the mixer running.  My dough never formed into a ball, it’s okay.  Let sit for five minutes and then add the olive oil until full incorporated.

Scoop the dough out into a bowl that has been coated with olive oil.  Drizzle the top of the dough with a bit of olive oil if it’s more of a lump than a ball like mine was.  Cover with plastic wrap and then a clean kitchen towel and let rise in a warm area of your kitchen for two hours.  I prefer the inside of my oven since it is free from drafts.

While the dough is rising, go ahead and shred the cheese and prepare your sauce.

In a saute pan over medium-low heat, add the 3 tablespoons of olive oil and garlic, which should be smashed with the side of your chefs knife.  Cook the garlic for 6 minutes until lightly browned and then flight, cook for another 6 minutes.  Turn off the heat, remove the garlic and finely chop.  Turn the heat back on, this time to medium, add the chopped tomatoes and their juices, garlic, salt, pepper and crushed red pepper flakes.  Cook for 10 minutes, stirring occasionally.  Set aside. 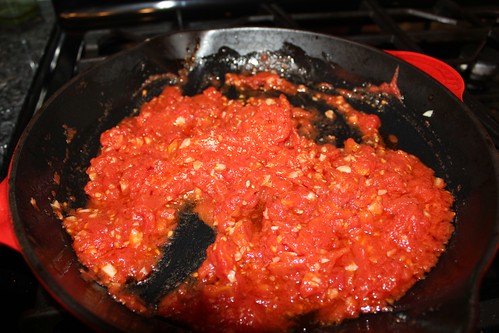 After two hours, the dough should have doubled in size.  At this time, pre-heat your oven to 500 degrees F., if you have a pizza stone place it on the bottom rack of your oven.  You should pre-heat your oven for at least 30 minutes, an hour if you have the time.  Looking back, I realize I should have also pre-heated the baking sheet that I cooked my pizza on, this would have resulted in a crisper and browner crust, so I suggest 20 minutes prior to preparing the pizza pop the baking sheet in the oven.

Once everything is pre-heated,  carefully add a few tablespoons of olive oil to a half-sheet sized baking sheet and scoop the dough onto the pan.  The dough should be large enough that you need to stretch it just a tiny bit to completely fit into the corners.  Drizzle another tablespoon of olive on top of the dough. 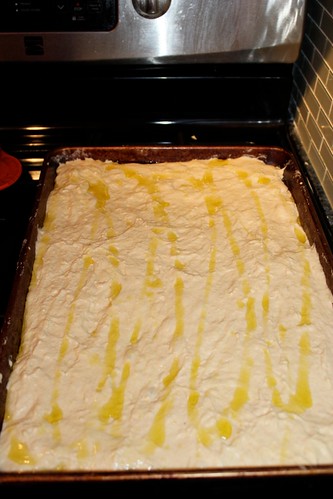 Evenly place the mozzarella around and then dot the dough with the sauce, it will not cover the entire pie, top with the grana padano. 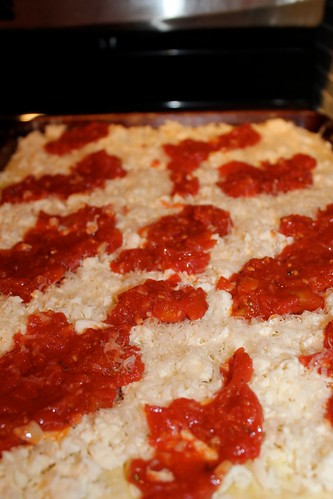 Bake for 8-10 minutes until the dough is brown around the edges and the cheese is melted. 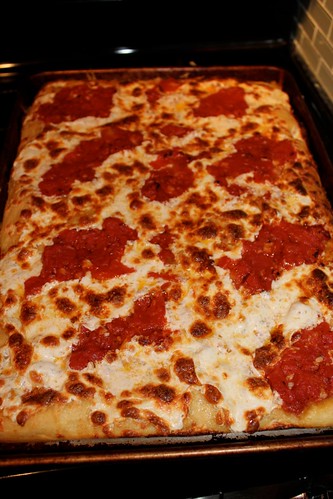 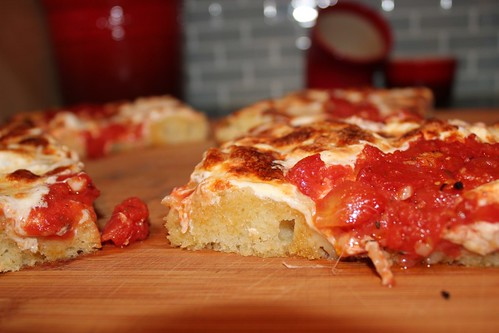