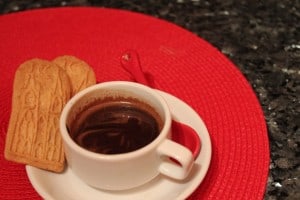 I have a confession to make.

I don’t drink coffee.  I don’t like it, never have, never will.

Blame it on chronic migraines and a long history of insomnia.

So when I want a hot beverage I have two choices, herbal tea and hot chocolate.

If you picked the tea, then you really don’t know me.

Except, I’m really picky when it comes to my hot chocolate.  My standards are set high and I generally compare everything to Jacques Torres Hot Chocolate. It’s thick, rich, and made with real chocolate – not cocoa powder.  Essentially, sipping chocolate sold in an 8oz cup.

When we were in Montreal last summer, I had the perfect cup of sipping chocolate.  So dark, the chocolate was practically black, and thick enough that you could have used a spoon instead of sipping it.  The drink was served in an espresso cup and it was just the right amount to satisfy the need for chocolate. 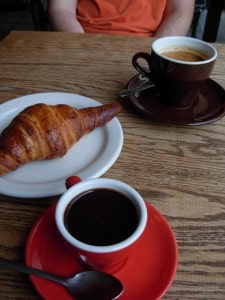 While we were in Luxembourg, Brussels, France and Cologne a few weeks ago I was determined to find a cup of that luxurious sipping chocolate again.

Unfortunately, it was much more difficult than I anticipated.  One hot chocolate was too watery, one was a little too milky and the other.  Well, that one was good – we had it at the  Schokolade Museum in Cologne. 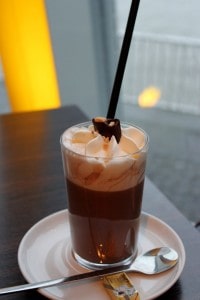 However, I don’t know if you can call it hot chocolate rather than hot chocolate shake. It was so thick that the whipped cream sat on top while I sipped the entire thing through the straw.

Having been home for three weeks now, my craving has yet to subside for sipping chocolate, so I’ve created a recipe for myself.  This is different than my last hot chocolate recipe. A little searching online showed me that the best sipping chocolate should be made with a ganache base and then frothed milk mixed in.

If you do not have access to a milk frother, warm milk whisked with an immersion blender should do the trick in its place.

This recipe makes for multiple servings of sipping chocolate.  However, the ganache can be refrigerated for a few weeks and reheated as an individual or smaller serving.  Just froth the milk when ready. 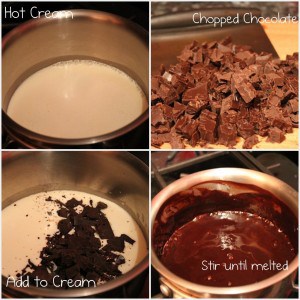 To make the ganache: In a small pot over medium heat – heat the cream until it just begins to simmer around the edges. Remove from the heat and add the chopped chocolate and whisk thoroughly until completely melted.

Stir in the kosher salt and vanilla extract.  Return the ganache to the heat and switch to low to keep warm.

Using a frother or immersion blender with warm milk.  Froth the milk until thick and set aside.

Fill an espresso cup half full with the ganache and top with the frothed milk.  Carefully milk together and serve.

The cooled extra ganache can be stored in an airtight container in your refrigerator for a few weeks. 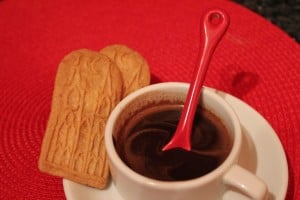