Almost 4 weeks ago the first ever all bacon bakery opened its doors (online only for now) to the public.  I sat down last week with Baconery’s founder and owner Wesley Klein for a Q&A session about the history and concept behind the Baconery.

It all began in the middle of June with an article in The Village Voice, the buzz started around the interwebs and Klein had his website, Twitter and Facebook pages live.  He was ready to make his dream a reality.

Klein decided to create the Baconery because he loves breakfast and sweets and thought the two would be great together.  While not a professional baker himself, he loves food, baking and creating new recipes.  He took the time to develop and test recipes for four months before hiring his baker, Carisa Torres.  Some of his ideas failed and some were successful and are on the menu today.   Carisa and Wesley have had a great relationship since starting production, concepts are consistently thrown into the mix and Carisa takes those ideas and runs with them.

A few of those recipes that came to be are: chocolate peanut butter bacon cookies; chocolate bacon cookies; bacon banana bread; bacon brownies; pretzel rods dipped in chocolate rolled in bacon and for your pooches bacon dog biscuits!

For those who do not eat bacon, Wesley, Carisa & Co. plan on adding turkey bacon oatmeal cookies to the menu by November.

Having had a chance to sample some product myself at The Bacon Takedown, I can tell you they do a great job of balancing the sweet and saltiness of the baked goods.  You know the bacon is there but it isn’t an overwhelming flavor.

As I mentioned in the beginning The Baconery can only be found online right now and currently ships to 48 US States but will soon be adding Hawaii and Alaska.  The plan is to ship to Canada by year end to eventually add international shipping by 2012.

If you are curious what the Baconery’s plans are for after the holidays, well they will start to look for a storefront in 2012 and expand into high end supermarkets along with constantly testing new recipes for their menu. 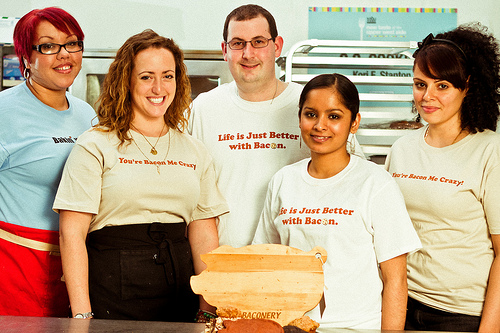 2 thoughts on “Baconery – The first ever all bacon bakery”