When someone sends you a box of panettone you make french toast.

When someone sends you two boxes of panettone you make french toast and bread pudding.

Foodbuzz teamed up with Bauducco Panettone to send out samples of two types of their Panettone to the Tastmakers team.

Panettone is a traditional holiday bread, you are likely to see it in the supermarkets starting around Thanksgiving through the New Year.

This was my first time trying panettone, I had seen it many times in the grocery store, on TV and in food magazines, but never really purchased it.  To describe the taste, I would say think of a very sweet, citrusy, extremely moist challah bread, studded with raisins and candied fruit.  For a packaged bread, it was very good and fresh and a brand that I would highly recommend.

Of course as I mentioned above, we were sent two samples of the panettone.  A box of the raisin and candied fruit and a box of the Hershey’s chocolate chips.  For a household of two, that’s a lot of bread, so I made french toast using the raisin panettone and bread pudding using the chocolate chip.  Both came out very well, but as I learned with the first piece of bread that I dipped in my french toast custard, leave it in for only a few seconds otherwise it will fall apart right away! 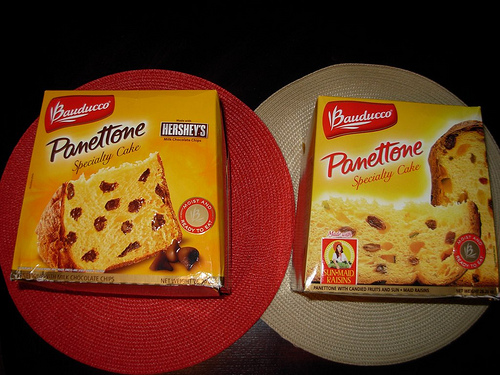 For the Pear Compote:

To make the compote: Peel and core the pears, and thinly slice lengthwise.

In a non-stick skillet on medium heat melt the butter.  Add the pears and cook until soft about 10-12 minutes.

Split the vanilla bean and using the edge of your pairing knife remove the seeds.  Add the seeds and the bean to the pan.  Mix together evenly and then add the brown sugar.  The sugar will cook down and caramelize quickly, about 30 seconds.  Stir until a nice sauce forms, turn off the heat and remove the vanilla bean. 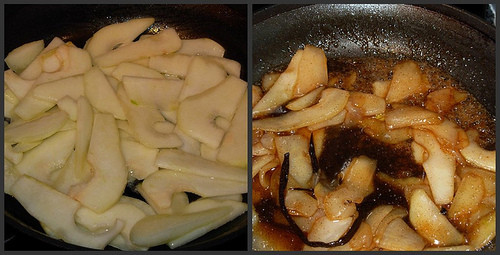 For the french toast:  Mix all the ingredients for the custard in a shallow pan or pie plate. Slice the panettone into 1 inch thick rounds.  Heat a cast iron skillet on medium/medium-high heat and add a pat of unsalted butter.  Soak the panettone about 5 seconds and flip.  Add the bread to the skillet and cook until brown and flip.  Repeat with additional slices. 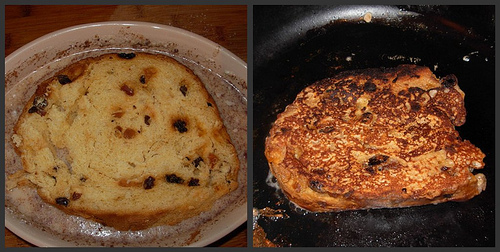 Top with pear compote and syrup from the sauce. 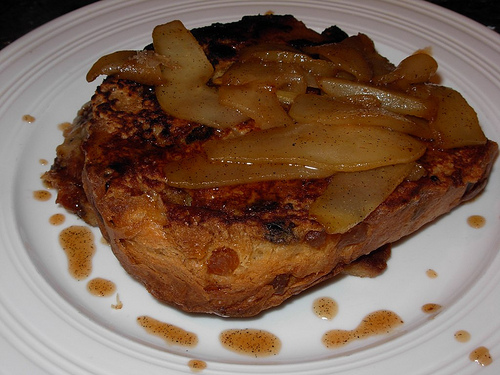 3 cups half and half

Preheat your oven to 350 degrees F.  Melt 4 tablespoons of the unsalted butter and set aside.  Slice the panettone into 1/2 inch pieces and place on a sheet pan. Drizzle the butter over the panettone and toast in the oven for about 10 minutes until lightly browned.

While the panettone is toasting, mix together the eggs, half and half, vanilla, sugars and salt in a large bowl.

After the panettone is toasted, remove from the sheet pan to a butter 13X9 inch dish. 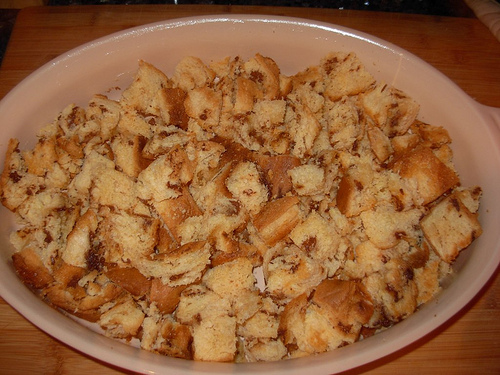 Pour the custard over the panettone and press down with a spatula to make sure everything is well covered.  Let soak for at least 30 minutes.

Once the panettone is well soaked, top with the remaining tablespoon of butter – cut up into small pieces and scatter the 1/2 cup of chocolate chips.  Bake for 35-40 minutes until the custard is set and brown on top. 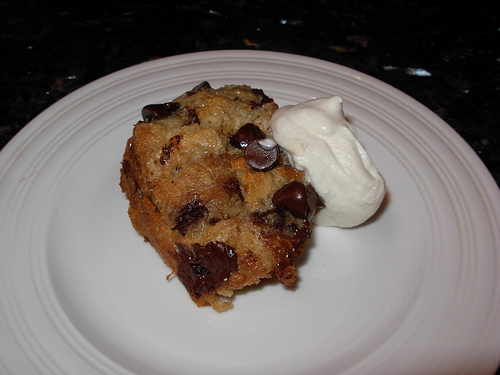