Loaded up with roasted butternut squash, rainbow beets, brussels sprouts, kale and toasted bread this Autumn Panzanella Salad is a nutricious addition to your weeknight meal and a colorful addition to your holiday table! 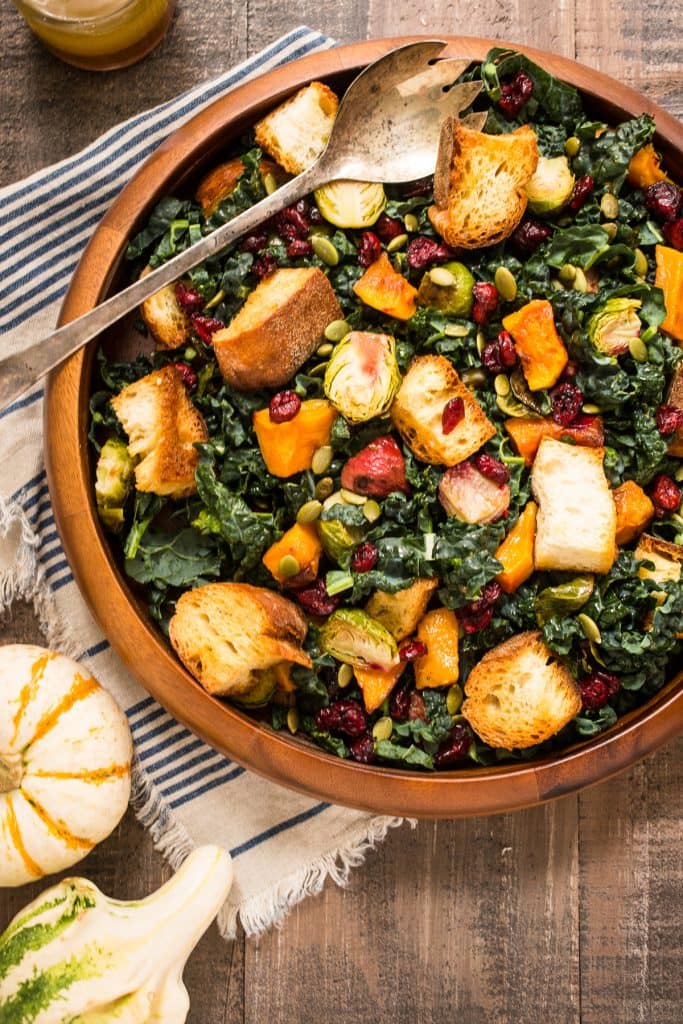 I have officially reached that point in the season where all I want to do is roast everything I can get my hands on.  Chop it, season it, set it and forget it for about 45 minutes until your house is toasty, warm and smelling irresistibly delicious.  I can’t think of a vegetable that doesn’t improve in quality once roasted and the autumn is filled with vegetables that scream roast me up!

The fall may be all about comfort food but comfort food doesn’t mean it has to be unhealthy.  It can be equally as comforting to sit down to a big bowl of vegetables as it is a big slice of cake.  Trust me, I’m not saying don’t eat the cake, just have your veggies first!

Which brings us to this autumn panzanella salad, it’s all about comfort with a big dose of healthy eating tossed into the mix. 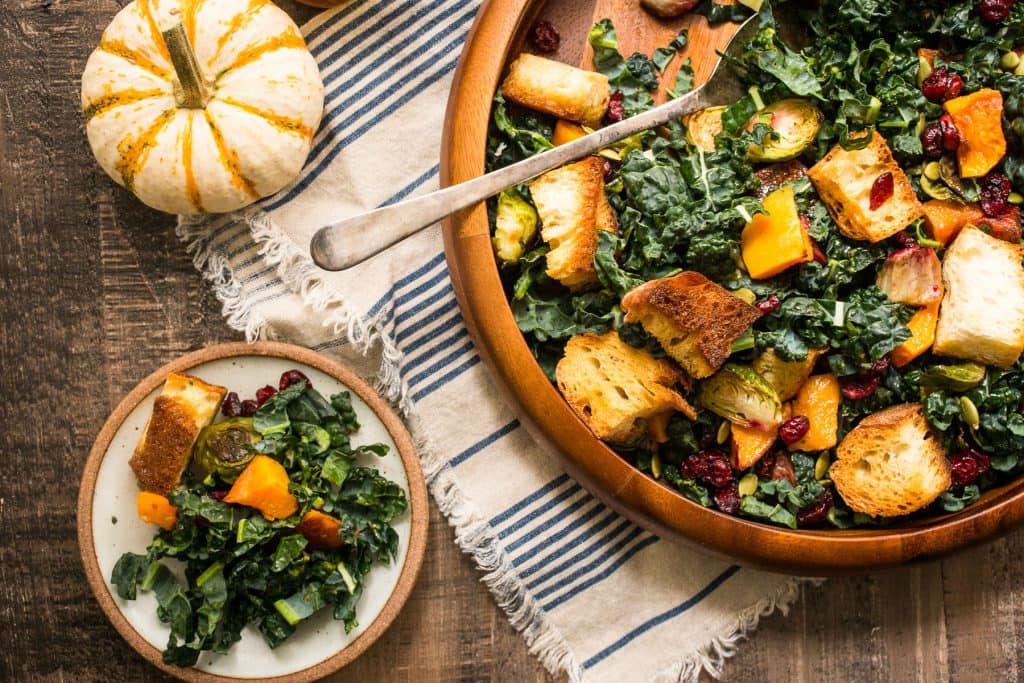 Traditionally speaking panzanella salad is a bread and tomato salad.  It’s a simple Tuscan recipe that uses up stale bread which was left just a day too long on the counter and tossed with juicy, ripe summer tomatoes.   Of course if you’ve looked at the calendar we are far removed from tomato season but that doesn’t mean we can’t breathe new life into the panzanella salad.

This salad is filled with everything you love about autumn, roasted butternut squash, brussels sprouts, rainbow beets, kale, dried cranberries, toasted pepita seeds and all tossed together with a honey apple cider vinaigrette.  Any bread you have sitting around will work perfectly, I happened to have a verging on stale baguette at home but go with what works for you.  Toast up some multigrain or sourdough or add extra sweetness with some old cornbread. 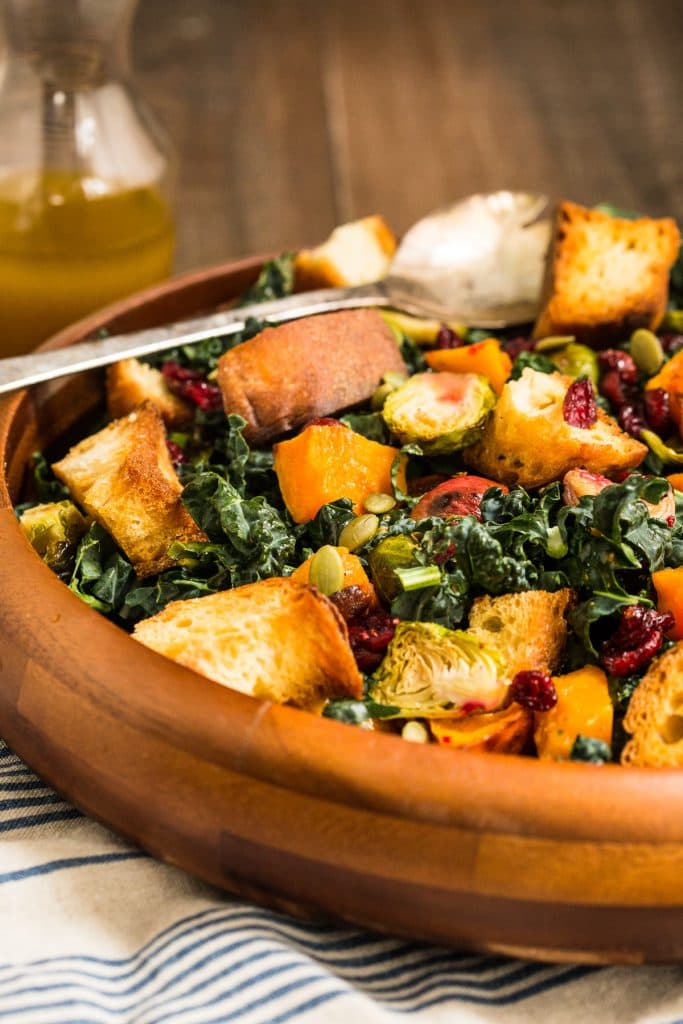 There’s a bit more work involved here than your average tossed green salad but once the vegetable chopping is finished, it’s as simple as roasting and letting the oven do its thing for an hour.  This salad would be a lovely colorful centerpiece at your holiday table or add it to your weeknight dinner rotation.

Personally for me, I roast up extra vegetables to put some aside for the salad to eat cold and serve the rest hot at another meal.  There are no rules with this salad, go and do what works for you! 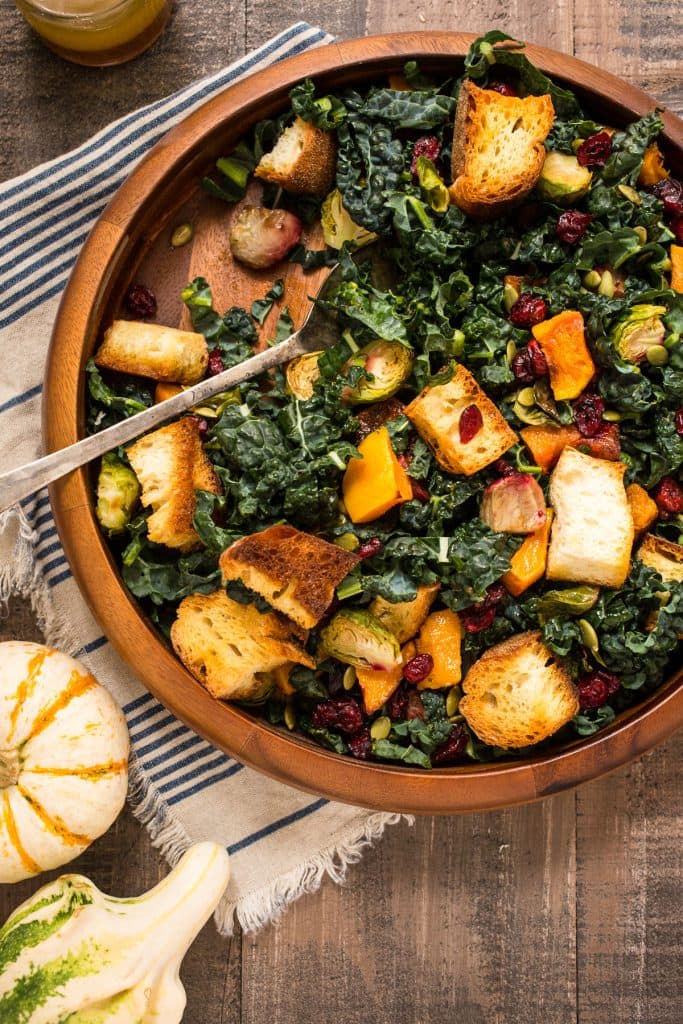