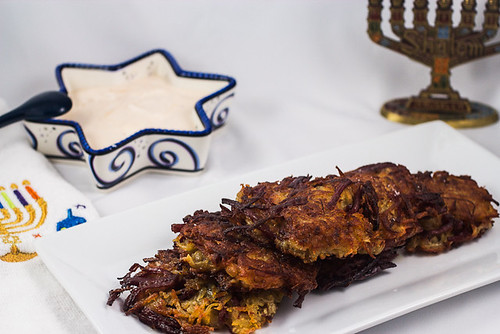 This is it! The coupe de grace! What I’ve been excitedly waiting to present to you all week long!  My masterpiece in latke making – Corned Beef Hash Latkes!!!

Yes! I did it! I took the most wonderful thing about brunch and made into a latke! And… I topped everything off with a delicious, runny fried egg.

Everyone can now bow down and declare my awesomeness. 🙂 Go ahead, I’ll wait.

Did I mention, there is duck fat involved? I mean, if I was going to go so far as to add shredded corned beef into shredded potatoes and onions, I might was well toss everything in duck fat.  Right? 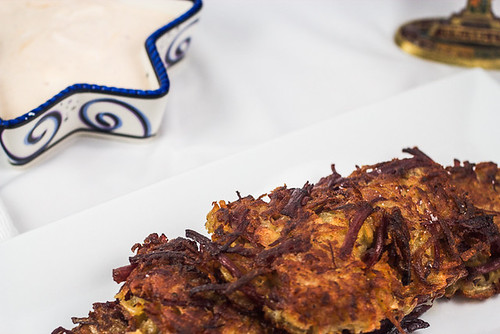 These latkes take a little more advance planning than my other recipes, but it is worth it. Trust me when I tell you, make the corned beef yourself (when I say “make”, I mean buy it already brined and simmer away). Chill that baby for a few hours and then shred it into tiny pieces the size of your potatoes.  It makes all the difference in the word and works seamlessly into your latke.

No hash is complete of course without a little sauce, to spice things up, I mixed in some chipotle sauce into my sour cream for a little smoky flavor and heat.  Feel free to add more chipotle sauce than I did if you like things on the spicy side. 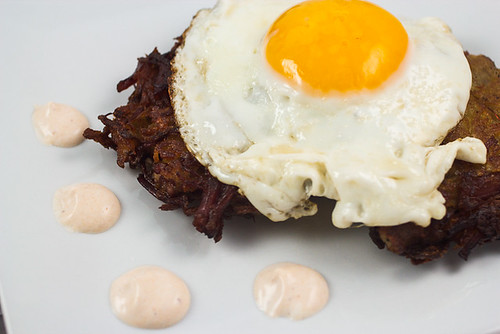 You'll notice I chose yukon gold potatoes over russets. Yukon golds fry up just as crisp, but leave you with a nice, creamy interior. It makes for the perfect latke. 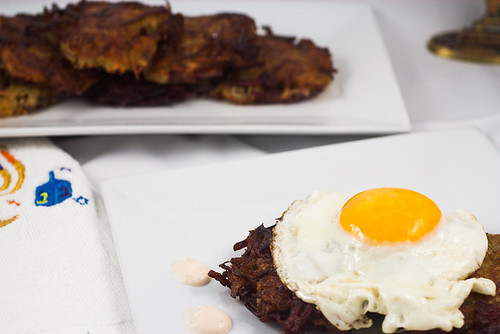 #latkeweek isn’t over just yet! Make sure to check back tomorrow for one final round up post!