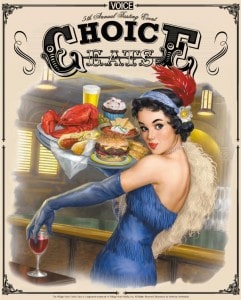 On Monday night, I attended the 5th Annual Choice Eats hosted by The Village Voice.  I think I might still might be full, and I barely tackled half the restaurants represented.  I attend a lot of food events, and this by far and large my favorite event of the year.

Choice Eats features 50+ restaurants around NYC that are hand picked by Robert Sietsema and Lauren Shockey of the Village Voice.  As the Voice’s food critics they know the best restaurants big and small in NYC and they bring it to us in little tastes at this amazing evening out.

As much as I wanted to, I just couldn’t taste all the participating restaurants.  There were the ones I was going to because I love (Resto, Mile End, Ample Hills, Robicelli’s), the ones I wanted to support (Jimmy’s No. 43) and everyone else who just looked good! So let’s get to the food, shall we?

I started off in the VIP Room with tastes from Murray’s Cheese, El Amacen, amazing corned beef from Brooklyn Cured, and bread and cheese from Scratch Bread. 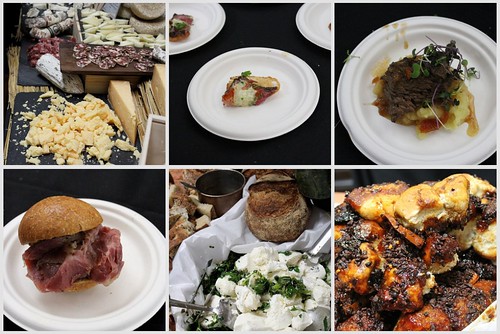 We got to move into the main room at the Armory around 6:10, enjoying 20 minutes before the main crowd of ticket holders took over and my first booth encountered was Ditch Plains.  They were offering up their signature Ditch Dog, an all beef hot dog smothered in mac and cheese.  It might sound gross, but I tell you, this is one delicious combination.  Chef Marc Murphy was also present to hand out dogs to the legions of hungry Choice Eaters. 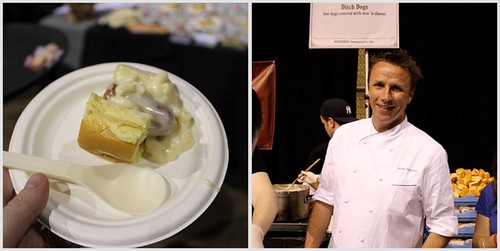 Working my way down the line, I had some hits and misses. Tenpenny offered up a tasty BBQ Bacon slider with “slaw” custard, but the Pork & Shrimp Sausage with Grape Jelly Sauce from No. 7/Sub No.7 was just too sweet for me to eat.  David’s Brisket house served both corned beef and a brisket sandwich.  The corned beef was a hit but the brisket was dry, and in my opinion both were too large of servings for a tasting event.  I want one or two bites, and they offered up an entire sandwich worth of eats! Court Street Grocers had one amazing dish and one forgettable one.  I’m still talking about their Alphabet Soup, that soup had the best chicken broth (it was actually a chicken consomme) that I have ever had (better than Mom’s even!) but I felt the meatloaf sandwich just didn’t hit the mark.  Finally,  my last bit of tastes on this line came from Sparrow Tavern – they offered a few dishes but what caught my eye was their Chocolate Olive Oil cake made with bittersweet chocolate, extra virgin olive oil, eggs, sugar, flour, almonds, cinnamon and spicy green olives.  Yes, OLIVES IN CHOCOLATE CAKE! Gross right, nope, absolutely delicious, I couldn’t even taste the olives. 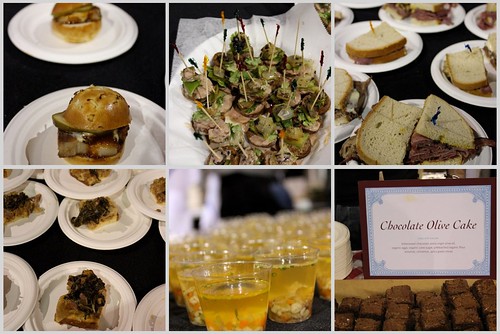 There were a lot more restaurants to choose from in the section that I was in but nothing was peeking my interest and I had a lot more to taste.  One thing that I noticed this year, and also a trend I see at many tasting events is an overload of braised pork/pulled pork dishes with greens.  I realize it is an inexpensive dish to make and simple to make in bulk, but the end result really isn’t that good or exciting and is that the dish that you really want to represent your restaurant by?  If I haven’t been to your place of business, Choice Eats is the perfect way to entice me to eat at your restaurant, so bring a sample that will get me in.

My next few stops were of the restaurants that I know and love.  First off, to Jimmy’s No. 43 to say hello to the staff and the chef.  While they brought out a braised meat dish, I really like the flavor combinations used on the beef, plus the additions of the pickled walnuts.  Then to Fay Da Bakery, which I haven’t visited but wanted to, I was extremely happy to see they were serving my favorite dim sum dish ever, steamed pork buns.  I’m positive, I consumed the entire bun in 30 seconds flat, and it was not small.  Continuing with my Asian theme, I had a smoked meat bun from Mile End. While I generally think Mile End can do no wrong (I don’t live close to them, yet I have gone there specifically for take out because I wanted Poutine for lunch) they went went  a little heavy with the hoisin sauce on my bun, resulting in a bit of salt overload.  Before moving on to something sweet, I hopped over to Resto to say hello to Chef Bobby Hellen and to try their Boudin Noir Baked Beans, which was by far the most original dish of the night.

Despite having access to Choice Sweets later in the evening, I need a sweets break at this point. The Blue Stove was next to Mile End, and I actually grabbed their chocolate and bourbon cake right after my bun to cut the amount of salt running through my body.  Great little bite, and I’m not a booze in my dessert fan!  Then over to Ample Hills Creamery, who is slowly taking over as my favorite ice cream shop (shhh don’t tell Brooklyn Ice Cream factory) and had several servings of their Salted Crack ice cream. 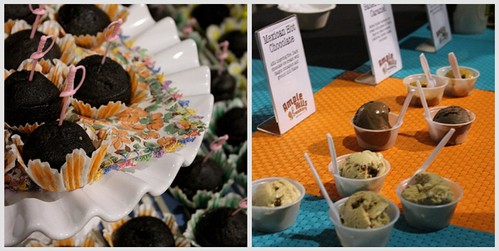 Sweet tooth satisfied, but tummy filling up it was time to really be picky or rather to imply the one bite method.  First up, Short Rib & Brisket Meatball Sliders from Kutscher’s Tribeca.  Then a really disappointing Sausage Roll & Mini Meat Pie from Sheep Station, a little seafood to kick the meat habit, a mini shrimp roll from Luke’s Lobster. 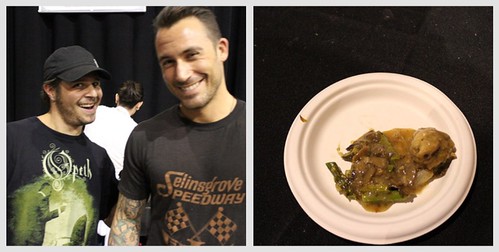 I took a 45 minute respite from eating, and then it was time for Choice Sweets, which only the VIP ticket holders had access to.  There were a lot of delicious looking sweets down there, but I was still so full and only managed a few small bites of dessert.  Most of my time was spent chatting up Robicelli’s, since we have a work connection and it was abosulutely necessary to discuss the new Broadway production of Newsies. 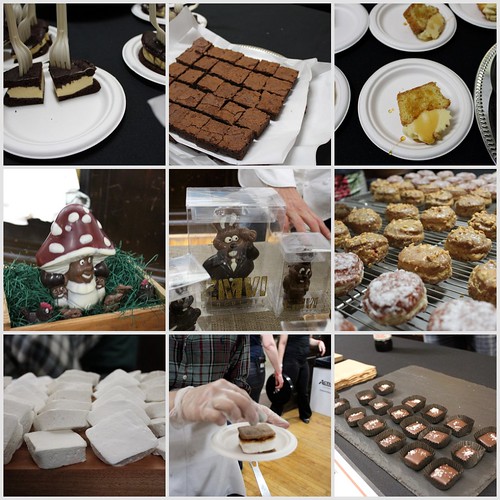