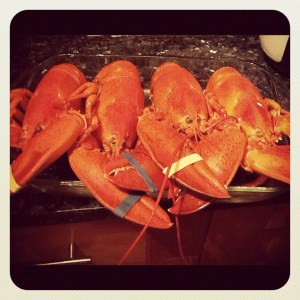 *update – the contest is now closed. Congrats to Laura for winning the mixer and thanks to everyone else for entering! *

Everyone say it with me now – Lob-stAH.

That’s right, if you don’t don’t say it correctly, you don’t get the recipe or the giveaway.

Awww. . . I’m just teasing you, but if I ever meet you in person, that is the only acceptable way to say lobster, oh umm. . I mean lob-stah.

The occasion for the lobstah mac?

It was my entry into the Brooklyn Mac and Cheese takedown held this past Sunday at The Bell House.

I figured, I tackled cookies – let’s see if I can tackle massive amounts of mac and cheese.

And I’m talking massive, like 8+ pounds of cheese purchased massive. 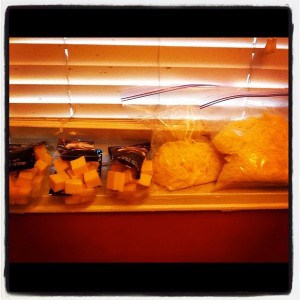 Lobstah mac has been my signature, special occasion version of mac and cheese for some time now.  However, I always did it with a cheddar and gouda blend.  This time, I knew I needed to kick things up but also wanted a cheese sauce that wouldn’t overpower the delicate flavor of the lobstah.

So I thought, decadent and awesome but not so overpowering – what else but fondue?

Gruyere is the prominent cheese, but I was looking for an additional flavor and also something that melted nicely without turning oily.

Say hello to my friend raclette cheese. Raclette is very popular in France and Switzerland – it can be found in large half wheels melted and scraped onto your plate, served with potatoes, charcuterie and cornichons.  It melts beautifully and has a nice mild taste that paired perfectly with the gruyere and lobstah.

I purchased my raclette cheese at Trader Joe’s, so I suggest looking there first.  It was sold in slices, which is fine, the cheese melts easily enough that it doesn’t need to be shredded. 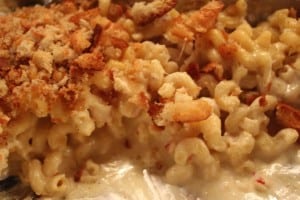 Unfortunately, I don’t have any glamour shots of the cooking process.  Cooking mac and cheese for over 200 people doesn’t really give you the opportunity to take photos along the way.  I managed to take a few at the event, but lucky for me my good friend and extremely talented photographer Ki was at the takedown.   She snapped a bunch of shots for me, so any watermarked with her web address are her handy work – do me a favor though, visit her site.  What she does with a camera is incredible,  you won’t be disappointed trust me. 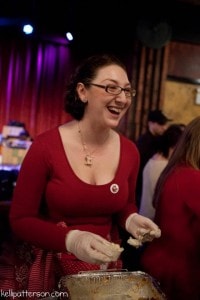 Plus, she’s the only person I know who has managed to photograph me laughing and not have me think I look ridiculous in the picture. p.s. Yes, that is a pug on my necklace. 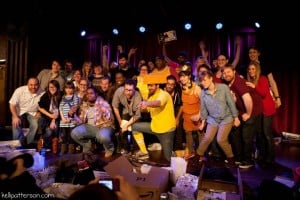 For the croutons: Using your food processor, pulse the bread multiple times until it is formed into half breadcrumbs, half crouton pieces.  Lay flat on a baking sheet and pour the melted butter onto the bread, trying to coat as evenly as possible.  Bake in a pre-heated 400 degree oven for about 10 minutes until golden brown.  Remove and set aside.

Bring a large pot of salted water to boil and cook the pasta for 11 minutes, or just slightly underdone.  Drain, but do not rinse and set aside.

While the breadcrumbs and pasta are cooking in a medium-sized pot, melt the butter on medium heat.  When it is mostly melted add the flour and stir constantly with a whisk, at this time also add the mustard powder.  Cook for 1-2 minutes to get rid of the taste of raw flour.  If the roux starts to darken, lower the heat – we are looking for a golden hued roux.

After the roux has cooked, slowly pour in half the milk, while continuing to whisk.  Once the roux is fully combined and there are no lumps, add in the remaining milk (always still whisking) and the cream.  Whisking every 30 seconds or so, cook for 7-10 minutes until the béchamel sauce is thick and it coats the back of a wooden spoon. It is very important that you not let the milk come to a boil, if the milk is too hot the sauce might break. At any time you see it starting to simmer, lower the temperature.  The best test is to run your finger across the coated spoon, if the line you made stays, the béchamel is done. Towards the end of the cooking process (around the 6 minute mark) add the cayenne, nutmeg, salt and black pepper.

Remove the béchamel from the heat source and begin to whisk in the cheeses a little at a time.  The heat from the sauce is enough to melt everything.  It also helps to keep the cheese out after  you grated it, room temperature cheese will melt faster.  Once all the cheese is whisked in and completely melted, mix in the chopped lobstah and then the cooked pasta.

Pour everything into a 3 quart baking dish and top with the croutons.  Finally, finish with a sprinkling of the al tartufo cheese on top.  I also like to add a little more melted butter before I add the al tartfuo.

Bake in a 400 degree oven for 10 minutes until the cheese is melted and browned and the rest has just set.

Remove from the oven and let sit for about 5 minutes before serving. 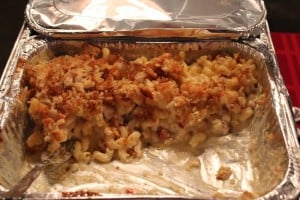 Oh yeah! That giveaway I mentioned – well if you’ve read this far then you get to find out what it is 🙂

You might be wondering how I fared in this entire competition – I won third place judges choice! We won a bunch of awesome prizes and I am giving one of them to you!

I am giveaway a Cuisinart Power Advantage 9-Speed Hand Mixer with Storage Case to 1 lucky reader! 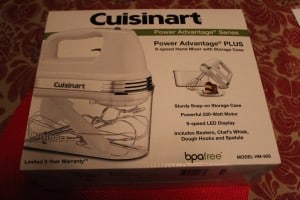 To win this, all I want from you is to tell me your favorite version of mac and cheese. There are three ways to do so.

I will then randomly choose one person out of that bunch. You can enter all three ways to triple your chances, the same answer is fine on each!

I will leave this open until Sunday, February 5 11:59 EST – super bowl sunday.  The one day where the most amount of people around this country are probably eating mac and cheese! 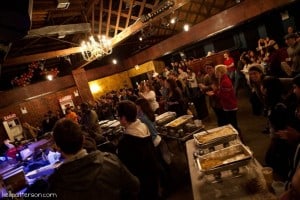 a whole lot of mac and cheese

30 thoughts on “Lobstah Fondue Mac with Truffle Cheese Croutons and A Giveaway!”