When you walk into an event and the first thing they do is hand you a bag of bacon swag and a strip of bacon you know it is going to be a good event.

About a week and a half ago, I opened up my inbox to see an invite to attend The Bacon Takedown at The Bell House in Brooklyn.  I had heard about the event the year before and even considered entering but didn’t feel like my idea was original enough for the competition (which by the way, what I wanted to do last year, was represented this year just slightly different, so I guess I could have entered…). So of course my first reaction was hell yes I’ll go and then my second thought was, isn’t it ironic that they’ve asked a nice Jewish girl from Long Island to go to the Bacon Takedown?

Let’s get down to the basics first – the Bacon Takedown is an amateur cooking competition where up to 20 chefs, armed with 15 pounds of Hormel Bacon (Hormel a sponsor of the event) come with their best, most creative use of bacon. People come, eat, be merry, vote and a bacon champion is crowned.

Matt Timms is the host and founder of the competition and it all began with his now famous Chili Takedowns.  It has since expanded all of the country, and besides bacon and chili there are taco, ice cream and cookie takedowns as well. 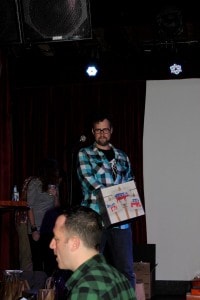 Enough facts – let’s get on to the bacon.

As I mentioned in the beginning, we were first greeted with some strips of bacon when you first entered – I over heard some people joking it was a “palate cleanser”.  Only at a bacon event folks! Also up front was the box to drop off your ballot for your favorite dish and the trophy for our first place winner. 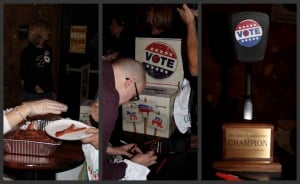 After that, to the right was a lovely set up by the all bacon bakery Baconery.  Some treats they provided for us were bacon brownies, chocolate peanut butter bacon cookies and marshmallow bacon bites.  I didn’t want to fill up too much, so all I got to sample was the choco-pb bacon cookie but it was fantastic!  Such a great cookie, excellent flavor with just that hint of bacon.  Not over powering at all.  I kind of wish I got back later in the day to try the rest out. 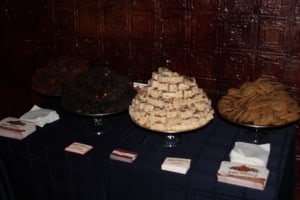 Since the Bell House is generally a performing arts venue, they set the contestants up as a half circle around the stage and had the crowd form two lines to grab their samples.

I have to say, this was one of the most organized food events I’ve ever been too.  The line moved quickly and efficiently.  We took our sample, placed it on our plate and moved on to the next contestant.  After the first 9 was on our plate, we stepped aside to eat.  Then back on again for the second line.  Kudos to Matt and the rest of the organizers for setting it up this way.   So for this reason, I present to you the first half of the samples 1-9 (okay, you’ll noticed there are only 8 on my plate, that’s because one contestant wasn’t set up yet, but I got it later on). 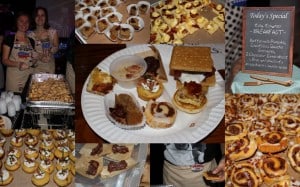 The contestants and dishes on this block are: 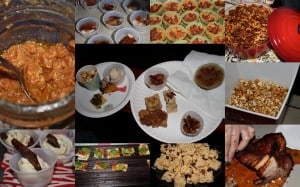 The remaining contestants are:

Everyone did a great job and it was a challenge to pick my favorite.   Luckily, there were plenty of awards and prizes to go around.  Not only did we have the overall winner/people’s choice but we had a judge’s choice and a special kudos too. 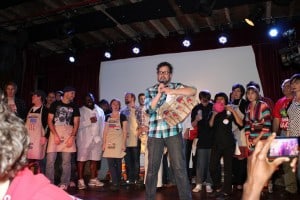 The kudos winners were each given a pig cutting board to continue their bacon cookery and they are: 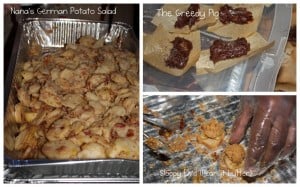 The three judges who had the difficult job of narrowing down their top three choices were Alex Van Buren of CHOW; George Motz of Hamburger America; Rachel Wharton of Edible Manhattan and Brooklyn and last year’s Bacon Takedown winner Jen Wanous.  Each winner of the judges choice won Anolon cookware, a Le Creuset griddle (jealous!) and a host of other cookware goodies. 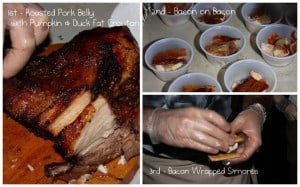 And finally we have the people’s choice and overall winners of the Takedown.  I unfortunately had to miss this announcement, or perhaps not unfortunately because I was running out the door to meet the in-laws to go see Book of Mormon.  Thank goodness for the interwebs and some emails to get me the names of the winners.  They too took home some wonderful cookware and I think a years worth of bacon! 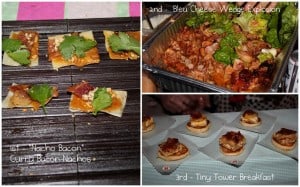 Such a great event and I look forward to next year.  Perhaps I’ll try my hand at competing…

One thought on “The Second Annual Bacon Takedown”