Just a warning – this post is going to be a little bit sappy.

Sweetie, this one is for you.  Happy Anniversary.

Three years ago I got to marry my best friend and it was the best day ever (every bride says that right?) However, I mean it, seriously.  I mean, do you know any other couples that have given themselves a team name? I can tell him anything, the girly things too, although I know he doesn’t always get it (or me!).  We have fun together, we laugh, we drink beer.  The beer – the beer is what brought us together (that’s another story).

We had it at the place that represented us the best – Bubby’s Pie Company. On the waterfront of a Brooklyn, over looking the skyline of Manhattan on a beautiful October day.

There was craft beer, plates so full of food people took doggy bags home, pie and our wedding cake was ice cream.

No, seriously it was. Look. 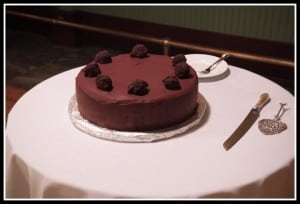 We are not cake people, I’m talking about bakery cake, you know yellow cake, fruit filling, generic frosting – gross. You should see my side of the family at affairs, we eat the cake and leave the filling and frosting on the plate.

I wanted ice cream cake so I went to this little French patisserie across the street from where we lived in Park Slope that made the best ice cream and asked her if she could make us two cakes. One vanilla, one chocolate both covered with chocolate ganache. The ganache was at least half an inch thick.  The cake cutter I borrowed from my mom barely cut through the cake.

There wasn’t one slice of cake left by the end of the night. We had no cake to freeze and eat a year later.  We went back to Bubby’s instead and had some pie.

Specifically chocolate peanut butter pie the other hit dessert of the night and that is what I’m making in honor of our three year anniversary. (If I could recreate our wedding cake, I would).

chocolate to decorate the top

For the crust: preheat the oven to 350 degrees F.  In a medium mixing bowl, mix together the cookie crumbs, sugar and butter.   Stir until crumbly and pour into a 9 inch pie or tart pan.   Press the mixture firmly into the pan and up against the sides.  Bake for 10 minutes, but do not over-brown.  Remove from oven and cool.

For the ganache: melt the chocolate on top of a double boiler over low heat and stir until smooth.  Add the cream, stirring until completely combined.  Spread a thick layer of the ganache over the crust over the bottom and sides as evenly as possible.  Chill the ganache in the freezer until set. 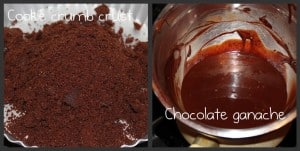 For the mousse: using the paddle attachment on your stand mixer, beat together the sugar, peanut butter, cream cheese and vanilla until light and fluffy.   Set aside in another bowl.  Clean out your mixer bowl and add the heavy cream.  Using the whisk attachment beat until it holds good, stiff peaks.

Place a few spoonfuls of the whipped cream into the peanut butter mixture and carefully mix together.  Then add 1/3 of the whip cream and fold in, rotating the bowl as you turn.  Add another 1/3 and fold.  Continue until all the whip cream has been folded into the mousse and it is light and fluffy with no chunks remaining. 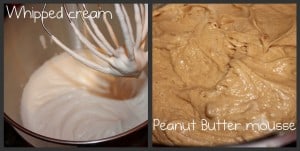 Remove the crust from the freezer and set 1/2 of the mousse aside. Carefully pour the remaining mousse into the shell and spread evenly.  Use a pastry bag to pipe kisses around the pie for decoration.   Shave some of the reserved chocolate on top.

Chill for at least 2 hours before serving. 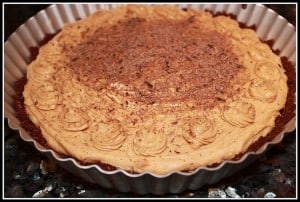