If you recall, way back in the beginning of August, I wrote how I was one of the lucky 50 to be chosen as a cupcake explorer for the Cupcake Project’s quest to find the Ultimate Vanilla Cupcake recipe.

While it seemed like a long time, it actually only took 3 rounds of recipe testing for a  winner to be chosen! 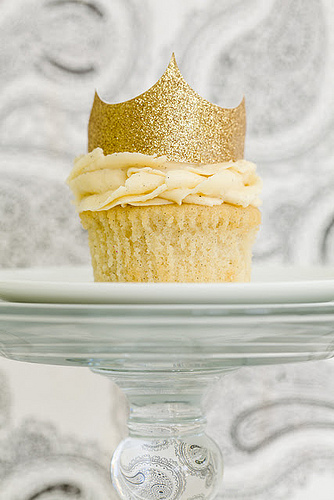 I came in on the second round of recipe tasting, but actually got to try out 3 separate vanilla cupcake recipes myself.

It was a wonderful experience, and I was able to get to know Stef via email because of it.  We corresponded back and forth a few times with my thoughts on how to impart more vanilla into the cupcake.  I suggested that perhaps steeping the beans in some cream first might help, since I always do that when I make vanilla ice cream and my ice cream has a very strong vanilla flavor.  Well, the thought was nice but the end result was not! Something wasn’t working right, either the humidity in the air or putting cream in the cupcakes because they were so dense and dry! Plus it added no extra vanilla flavor.

Finally, a few weeks after our mini-testing the round three cupcake recipe appeared.  It was similar to the others, except this time we were going to make vanilla sugar.  I had high hopes and started making my cupcakes.  The texture was perfect, light and fluffy.  So light that you could have a second and not feel full (I’m not going to say guilty, that decision is up to you!) But to me, I still didn’t get the strong vanilla taste, perhaps my standards are just too high (and if my husband is reading this right now, he is looking at the screen and nodding his head yes they are), because 66% of the testers came back with an absolute yes! This is the ultimate vanilla cupcake recipe.

Even my own testers agreed it was a great vanilla cupcake.

I decided to bake these one more time before posting the recipe.  I thought my vanilla beans were old, and I wanted to use a better brand of vanilla.  My opinion – still an amazingly good cupcake, and when paired with the vanilla bean buttercream frosting all you smell is vanilla and all you taste too.  I just don’t taste an abundance of vanilla in the cupcake alone.  It doesn’t mean I won’t make it again, because I will.  Trust me, this is a crowd pleaser.

Plus I know my taste testers, aka my co-workers are going to be very sad now that this project is over.

In a small bowl, combine sugar and seeds from the vanilla bean. (For those of you who are new to using vanilla beans, check out this video to learn how to get the seeds out of the bean.)

Using the back of a spoon, move around the bowl and apply pressure to break up any clumps of seeds and to better infuse the vanilla flavor into the sugar. Set aside.

In a medium-sized mixing bowl or bowl of a stand mixer, mix together cake flour, baking powder, baking soda, and salt.

Add the vanilla bean sugar and mix until well combined.

Add butter and mix on medium-low speed for three minutes.  Because there is so little butter, you’ll end up with a very fine crumb texture.

In a small mixing bowl, whisk together eggs, sour cream, oil, and vanilla extract until smooth.

Add the egg mixture to the flour mixture and beat on medium speed until just combined.

Slowly add milk and mix on low speed until just combined.  The batter will be liquid.  (Don’t worry, you didn’t do anything wrong.  It’s supposed to be that way.)

When the cupcakes are done, remove them immediately from the tins and leave them on a cooling rack (or just on your counter if you don’t own a cooling rack) to cool.

You can find the recipe for vanilla bean buttercream here. 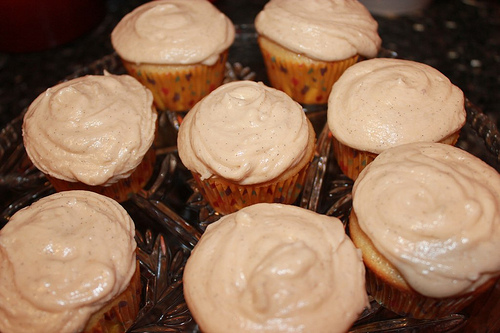