Since returning from Montreal, there have been two things that I’ve been wanting to do.

I accomplished both this weekend, and you see I needed to visit one in order to make the other.  One of the draws to Beecher’s Cheese is the fact that they make their own cheese right there in front of you.  Granted, you might not always be there when the cheesemongers are in action, but their kitchens are full on display for everyone who walks into their store.

Since they make their own cheese, I had a strong feeling that they would sell fresh cheese curds.

For those not in the know, cheese curds are 1/3 of what makes poutine – poutine.

What are cheese curds you ask? Cheese curds are the solid part of soured milk, or what you get when you make cheddar cheese but don’t compress it together into a block and age.  It is also known as “squeaky cheese” because that is the sound it makes when you bite into it.

By the way, my suspicions were correct and I was able to pick up some fresh cheese curds at Beecher’s. 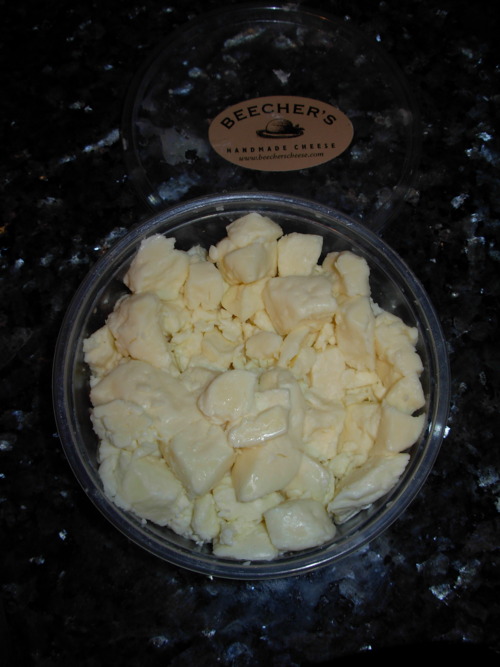 Next up was to make the fries and gravy.  Since I have a small fear of deep frying at home, I baked my fries.  Purists will probably say I cheated, I say I made this slightly healthier, although not by much.

Also with some research, I was able to come up with a good idea on how to make the poutine gravy.  I didn’t have any homemade stock at home, but ordered some from Fresh Direct and was perfectly fine.  If you use canned or boxed go with low-sodium.

In a small saucepan bring the stock to a boil.

In a small pan melt the butter over low heat and mix in the flour to create a roux.  Cook for about 2 minutes, stirring constantly, to cook out the taste of raw flour.

Whisk the roux into the boiling stock until completely dissolved, the stock should thicken right away.  Add 1/2 to 1 teaspoon pepper depending on how spicy you want the gray to be. Bring the stock down to a simmer and reduce by half, about 30 minutes.  After the gravy is reduced, add a pinch of salt. 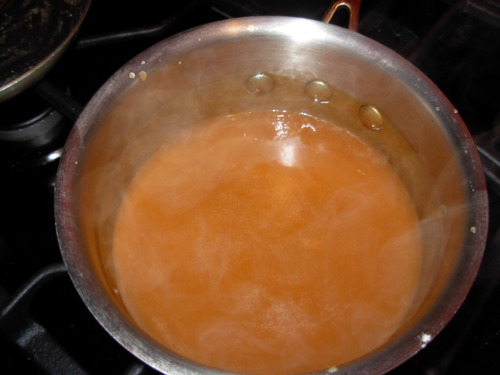 Preheat the oven to 425 degrees F.  Using the french fry blade on a mandolin slice the potatoes into matchsticks.  If you don’t have a mandolin, slice into 1/4” sticks.

Coat with olive oil and season with salt and pepper.  Place in an even layer on a baking sheet and cook 35-40 minutes until brown and crisp.  Turning halfway through the baking time. 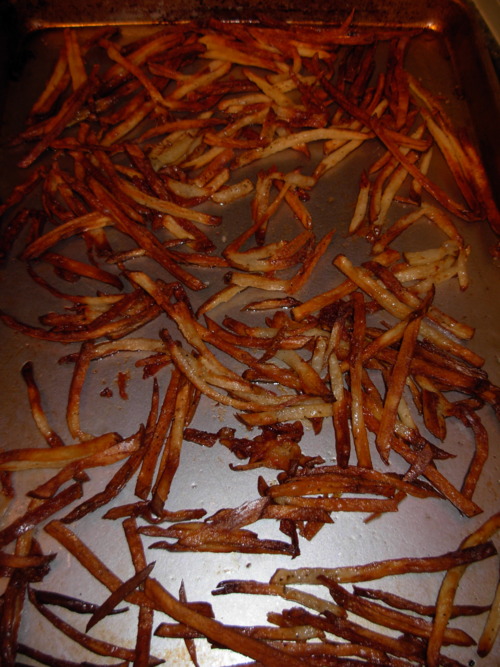 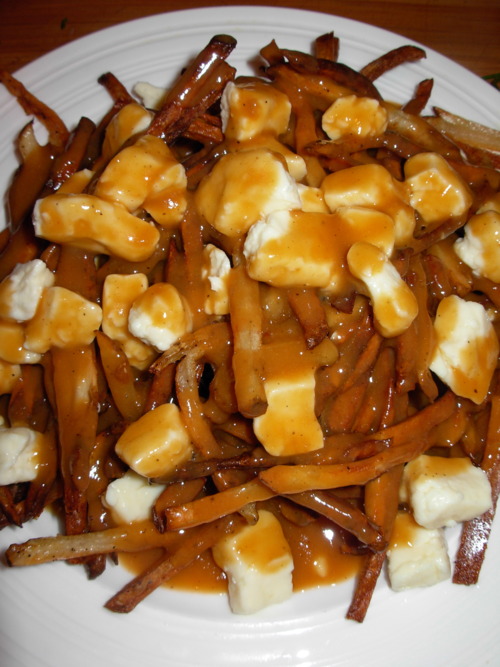